Thanks to MeasurePoint, you can now create 2D scale drawings of your crime scene surveys even faster and easier. See for yourself now the many ways you can use it. 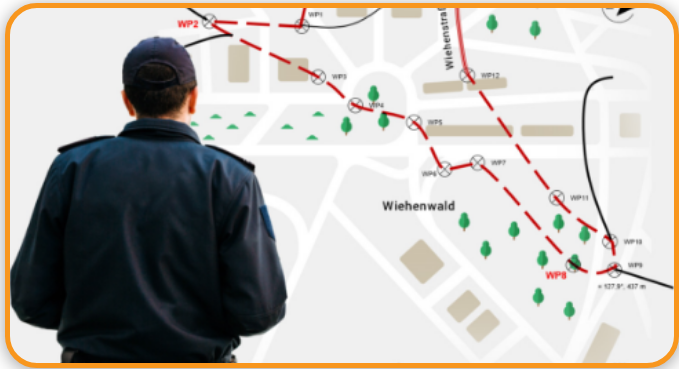 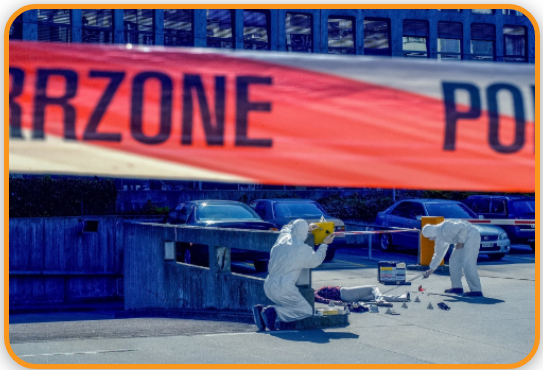 Thanks to MeasurePoint, it's now even faster and easier to create 2D drawings to scale of:

Convince yourself now of the wide range of possible applications.

See for yourself the many functionalities and benefits of MeasurePoint. Whether you need terrain or building drawings, accident or crime scene surveys, MeasurePoint can support you in all your endeavors.

For the creation of site plans, sketches and crime scene scenarios

Export as PDF or PowerPoint files (without license)

Multiple icons to complement the drawing

Support during the creation of your planning

No matter at which stage of your planning: We support you with our expertise

Whenever a 2D accident / crime scene drawing needs to be made due to a legal requirement, MeasurePoint is a quick and easy alternative to the previous manual drawing. Convince yourself of the many possibilities of the different measurement methods!

The right-angle measurement method is a method to create true-to-scale reconstructions of outdoor and medium-scale incident locations. Classically, it is used for traffic accidents

Application:
With a tape measure (at least 25 m long), a measurement baseline is laid out. At best, this line connects two prominent points (lamppost, manhole cover or similar). A second measuring tape is used to measure at right angles from the measuring point to the measuring baseline. In this way, road courses, objects and tracks are measured and displayed to scale with the “Right Angle Measurement” tool.

Application example: accident reconstruction:
The scene of an accident is the premises of a furniture factory. Here, an accident has occurred between an employee and a moving forklift truck. The plant security of the furniture factory records the accident and creates a true-to-scale accident sketch on the basis of the right-angle measurement method. 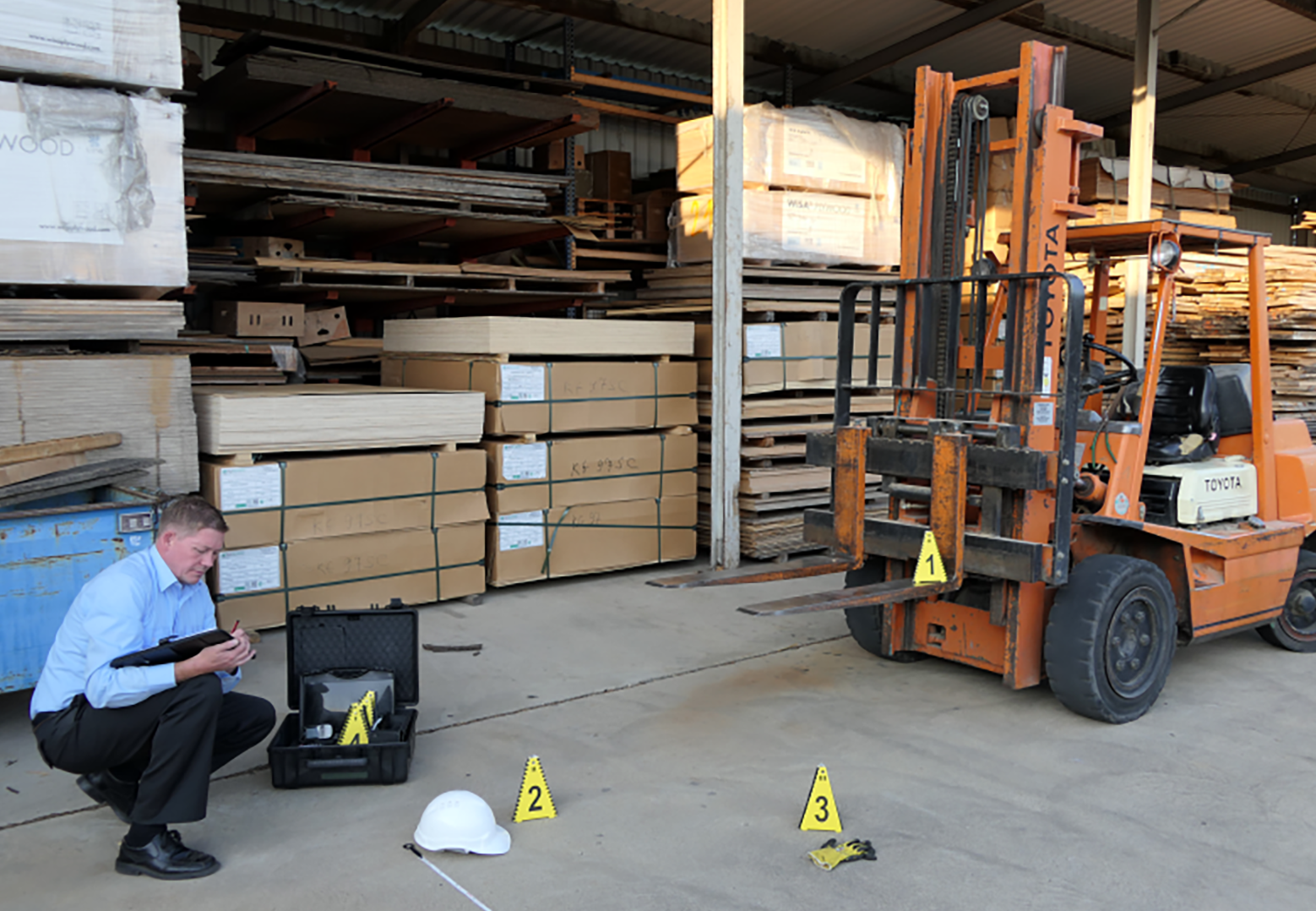 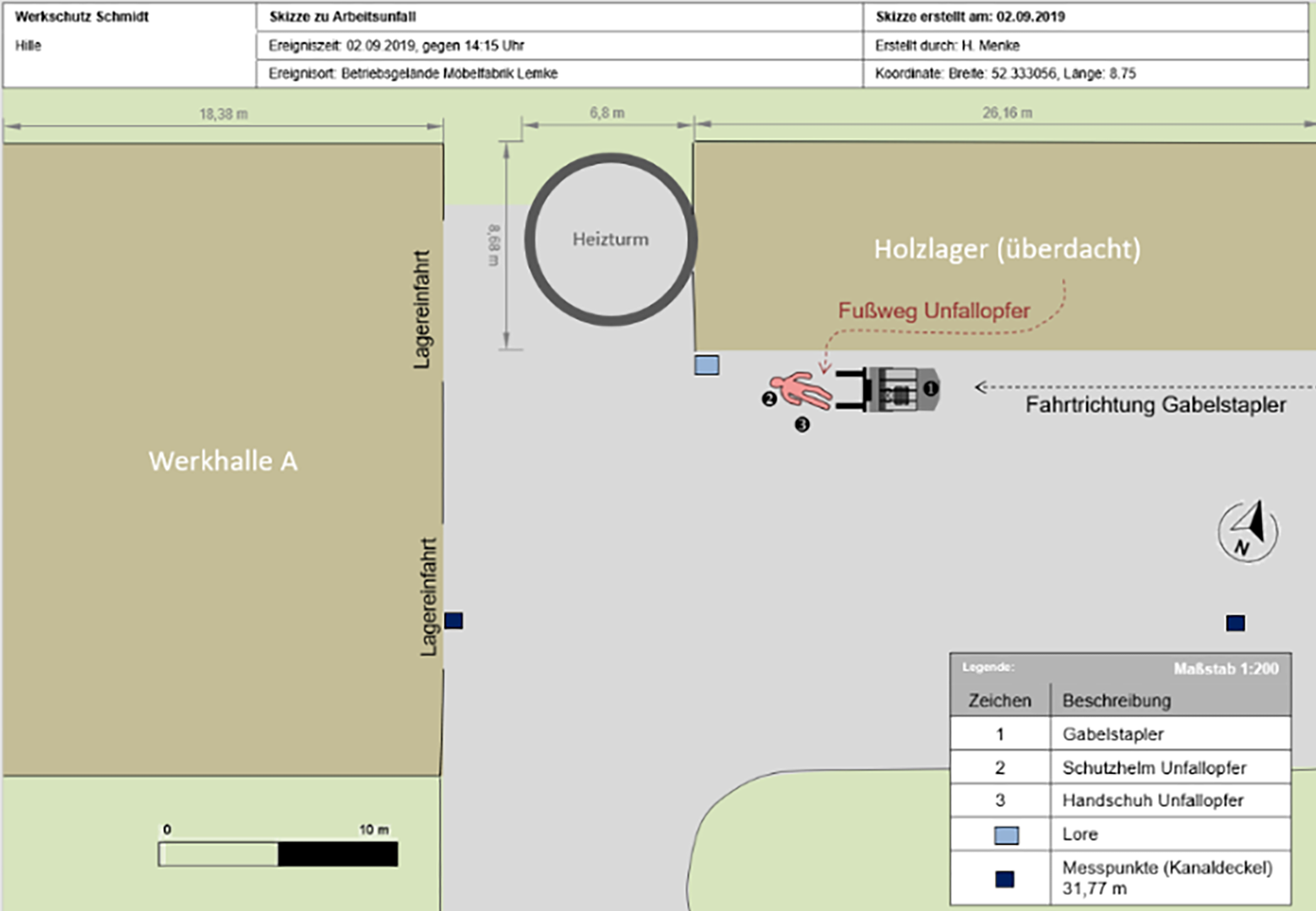 The triangle measurement method is a method to create true-to-scale reconstructions of outdoor and medium scale incident locations. Classically, it is used for traffic accidents

Application example Tat reconstruction:
Due to a storm, a tree on a car dealership property fell on a parked car. Distracted by this, there was a rear-end collision on the adjacent road. The arriving police create a true-to-scale accident sketch based on the triangle measurement method. 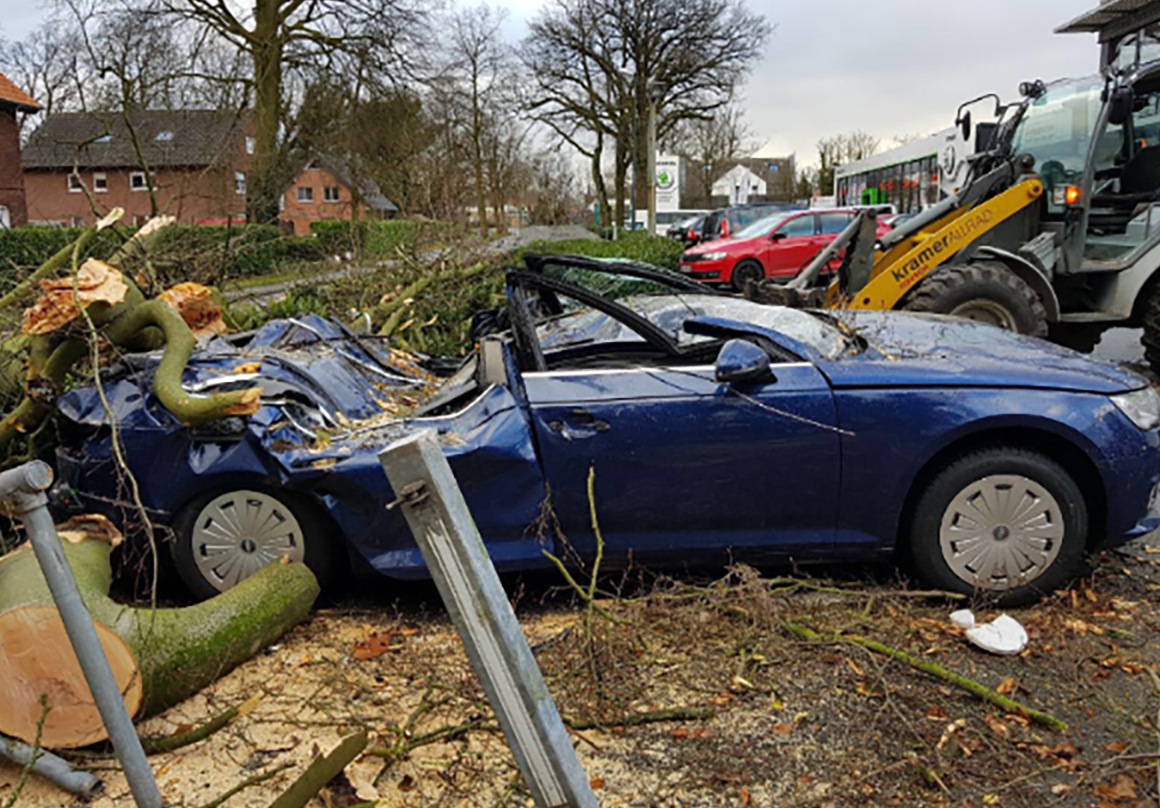 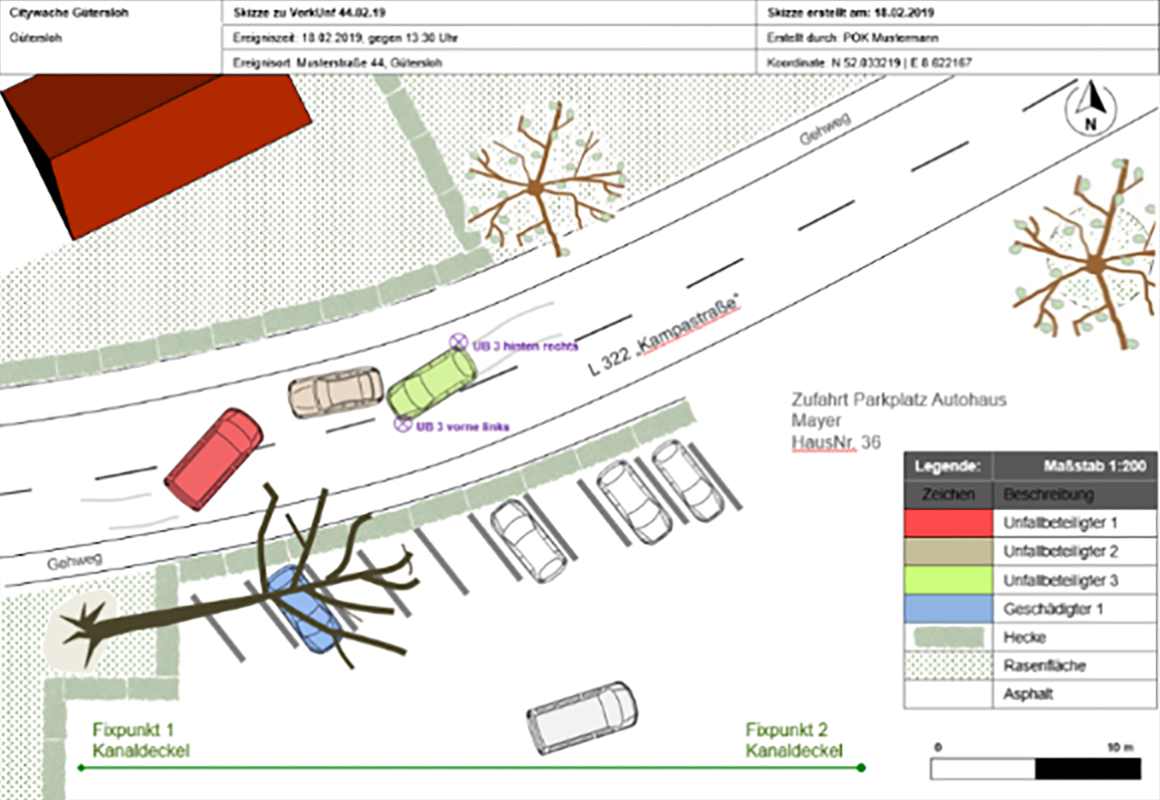 The two Quick methods are based on the right-angle and triangle measurement methods and are simple methods for creating true-to-scale reconstructions, especially of rooms. However, this method is also used outdoors, e.g. in the context of traffic accident surveys.

Application:
With simple, commercially available measuring devices, such as tape measure, folding ruler, laser distance meter, rooms and the position of objects and traces or trace areas can be represented to scale by means of right-angle measurements.

Application example crime reconstruction:
Crime scene is the living room of a single-family house where an attempted killing took place. The murder weapon was a kitchen knife. The immediate crime scene is measured with a laser distance meter. 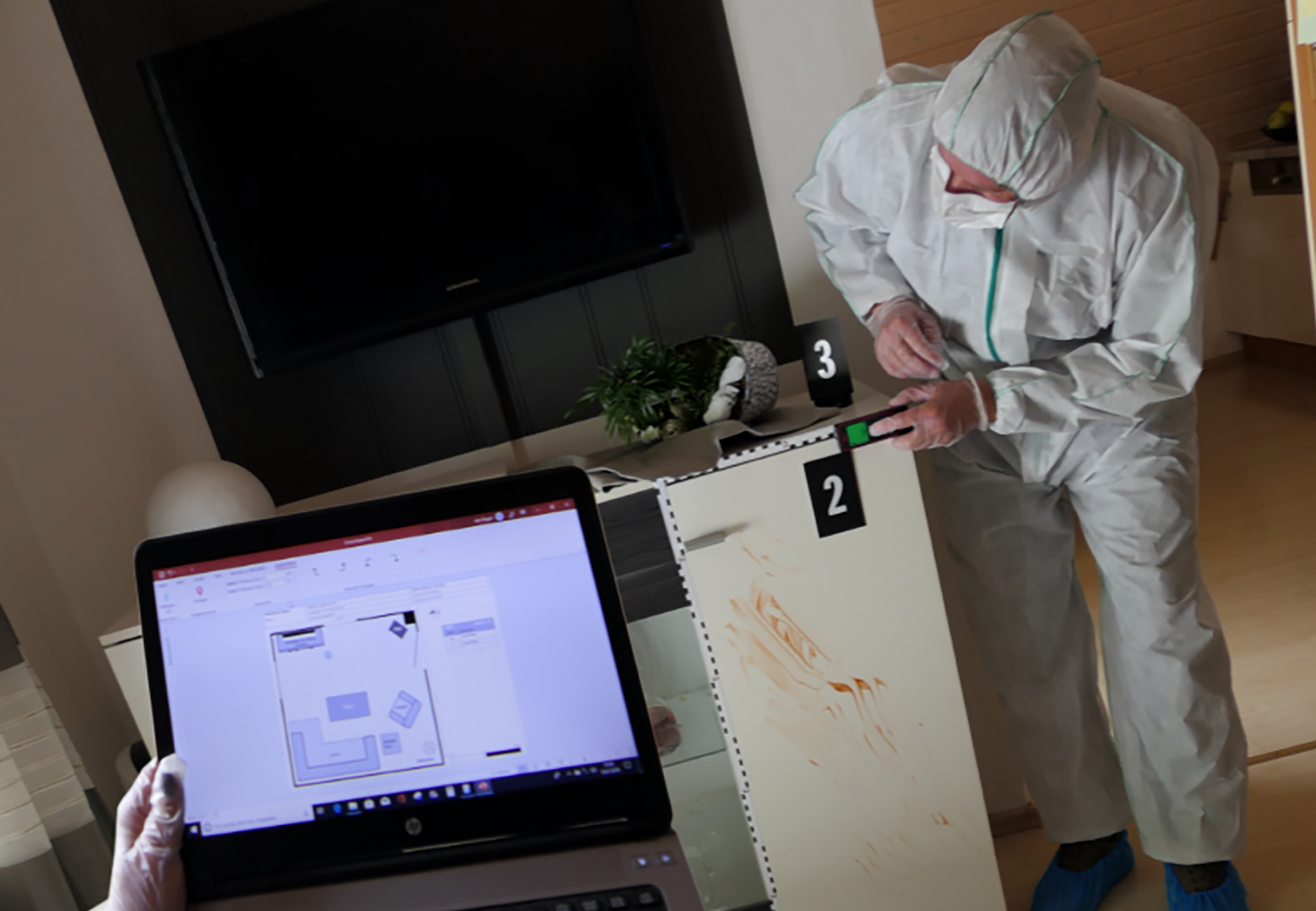 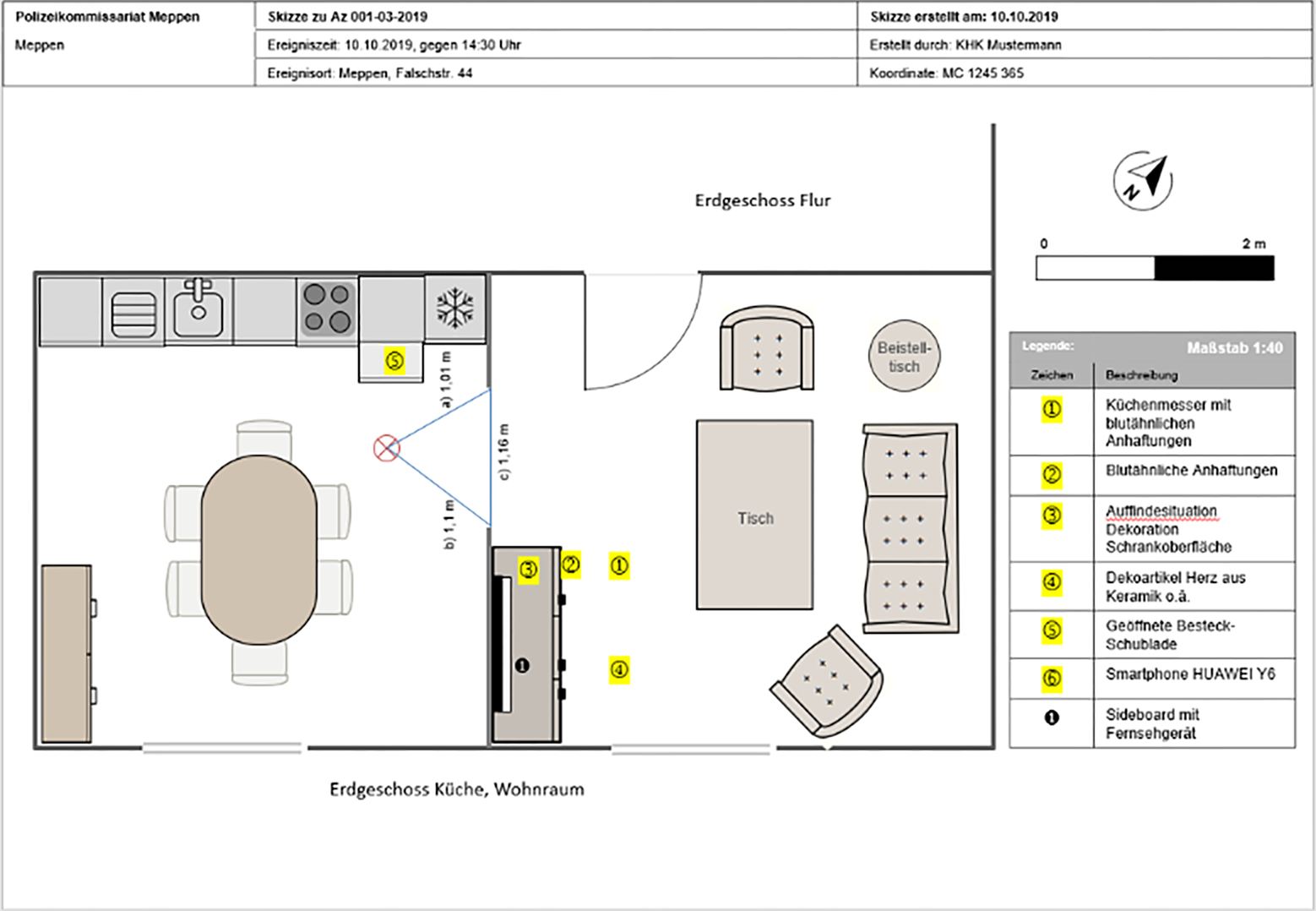 Distance spiders are used in particular for outdoor crime and event locations when measurement data must be collected in the vicinity of the crime or event location. Examples include aircraft accidents, explosives attacks, other explosion events, etc.

Application:
By means of a laser range finder, the distance and direction from the center to the target object are measured. The program sets the determined target data in a scaled relation to the center.

Application example crime reconstruction:
Crime scene is a gravel road leading to a private property with partially wooded area. The perpetrator(s) detonated an explosive device placed in the road by radio remote detonation out of sight when the victim vehicle was over the explosive device. Investigators set up trace areas, which are measured in relation to the blast center using a laser measuring device. The tracks are then measured in. For crime representation and reconstruction, a scaled sketch is created based on the determined values using the distance spider function. 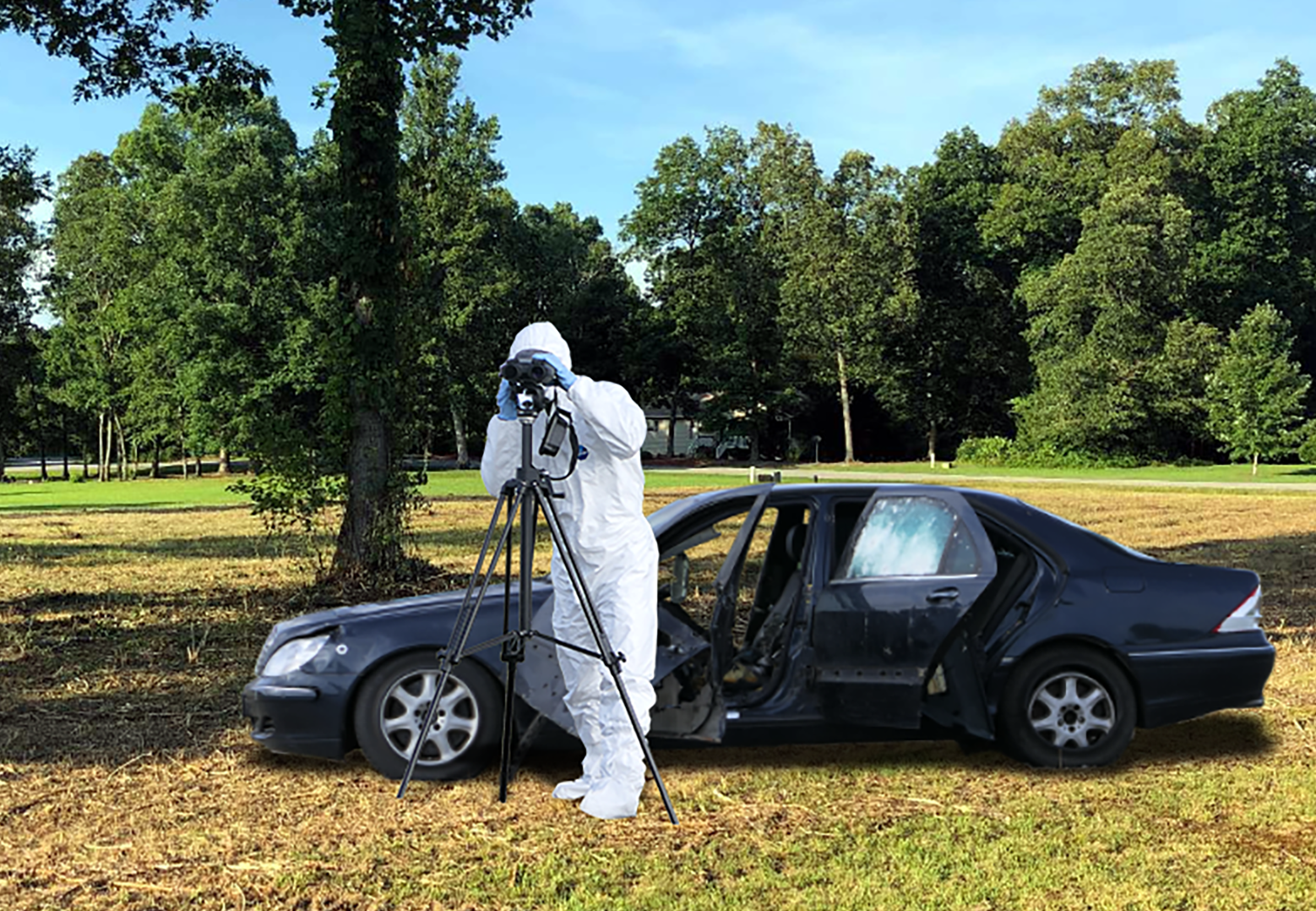 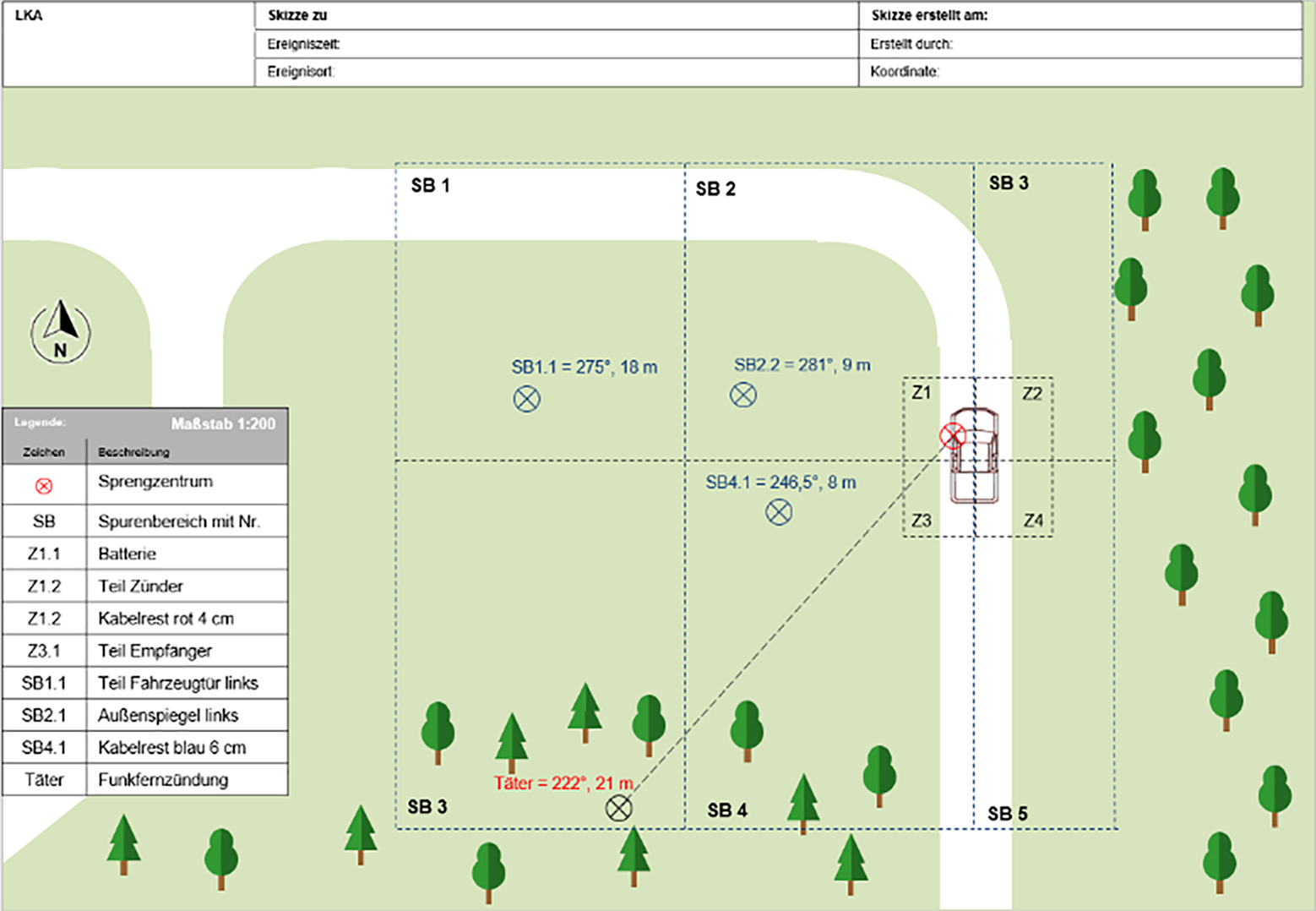 The GPS measurement method is used especially for crime and event locations of larger scale in order to represent them true to scale.

Application:
By means of GPS device the coordinates of reconstruction-relevant points are determined. The program sets the determined coordinates in relation to each other true to scale.

Application example crime reconstruction:
Crime scene is a forested area where a violent crime resulting in death has occurred. The perpetrator took the victim by car to a parking lot near the forest and from there dragged her into the forest area. On the way, the perpetrator and the victim left traces, so that the route taken can be reconstructed. 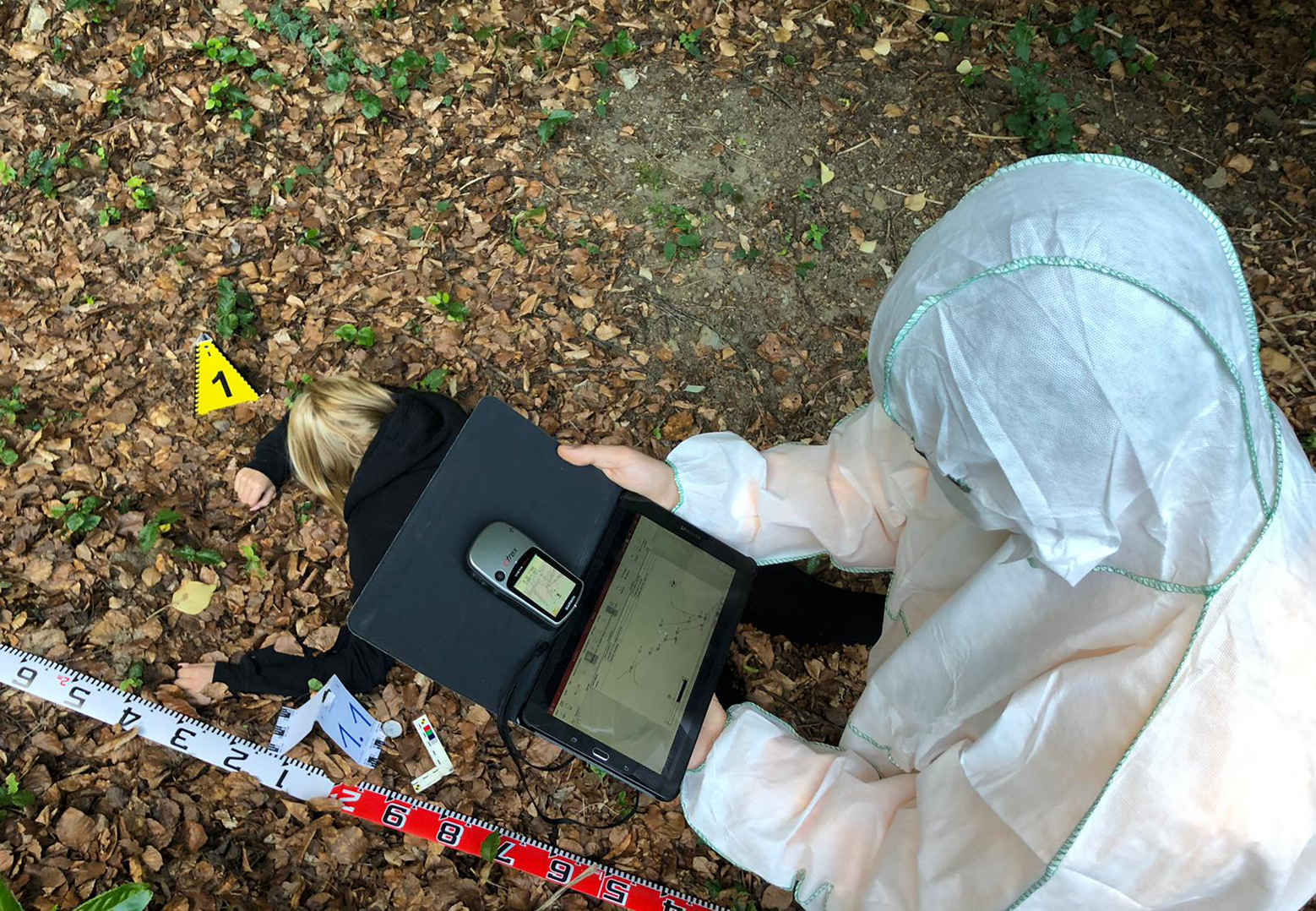 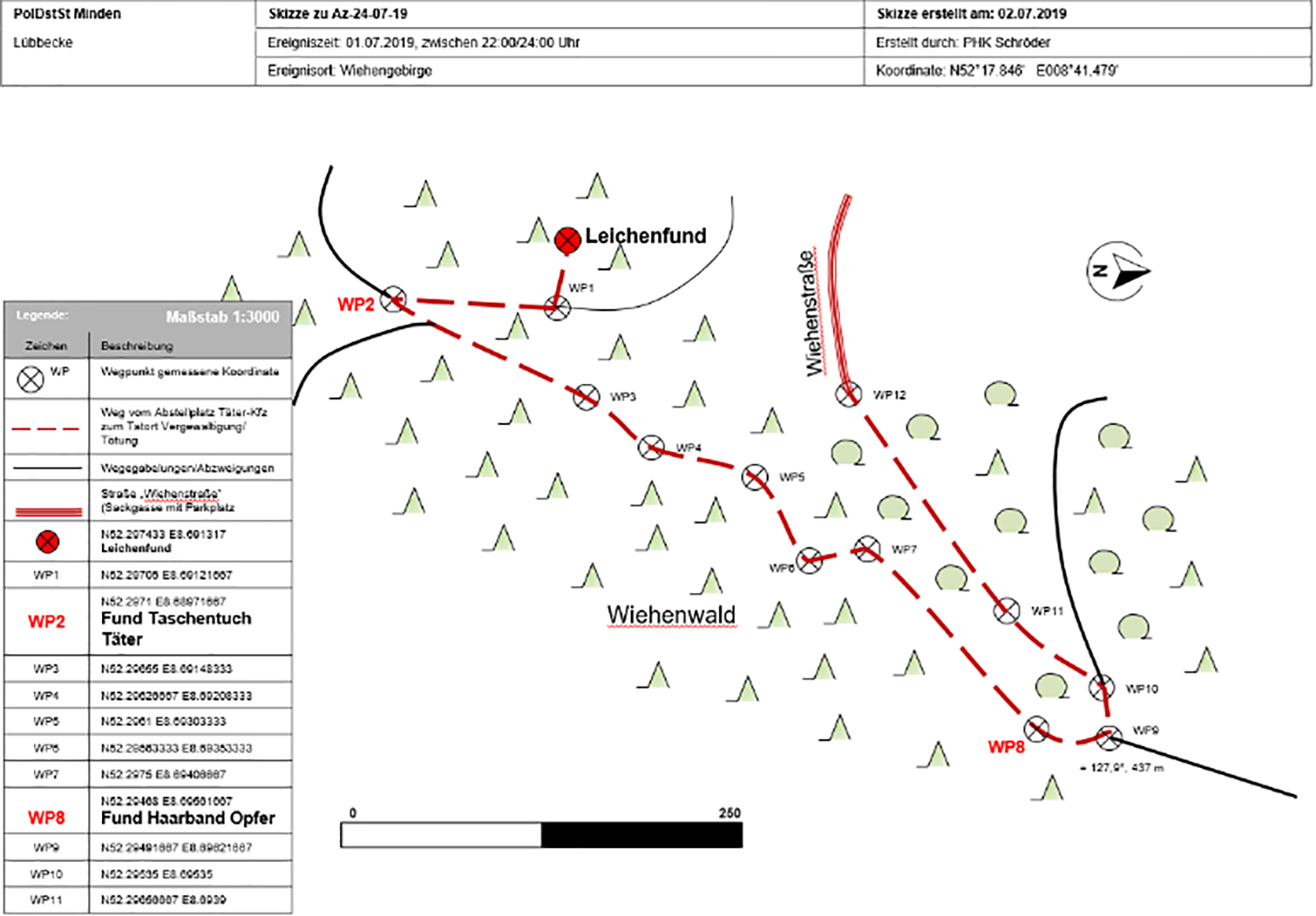 With the additional tool “Crater measurement after explosive attacks” crater sketches true to scale can be made. After entering the crater measurement data, the “Calculate” button is used to calculate the crater depth. The “Draw” button is used to calculate the optimum scale and draw the explosive crater into the sketch sheet. Elements of the inserted sketch can be subsequently changed, for example, to highlight striking changes. To do this, click on the corresponding sketch element, select the first “Format” tab and then select the “Edit shape” – “Edit points” function. Object points can now be changed by holding down the left mouse button. 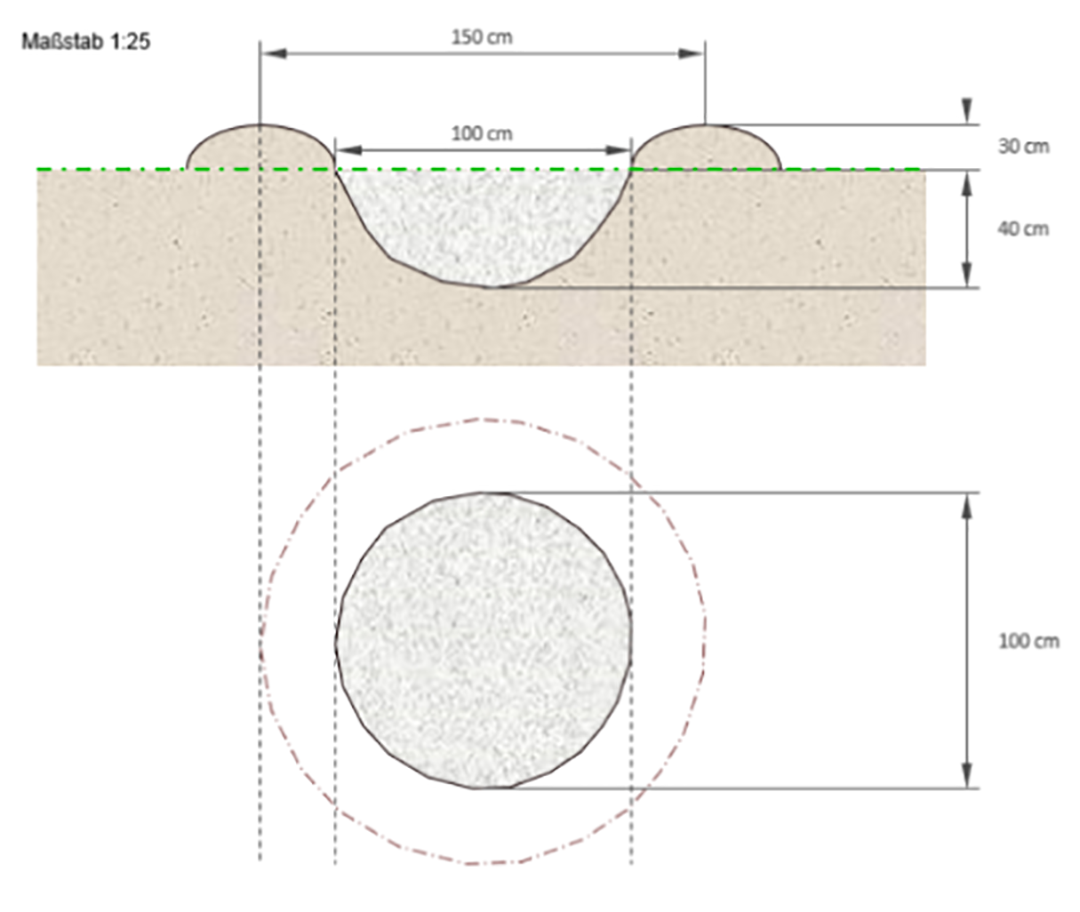 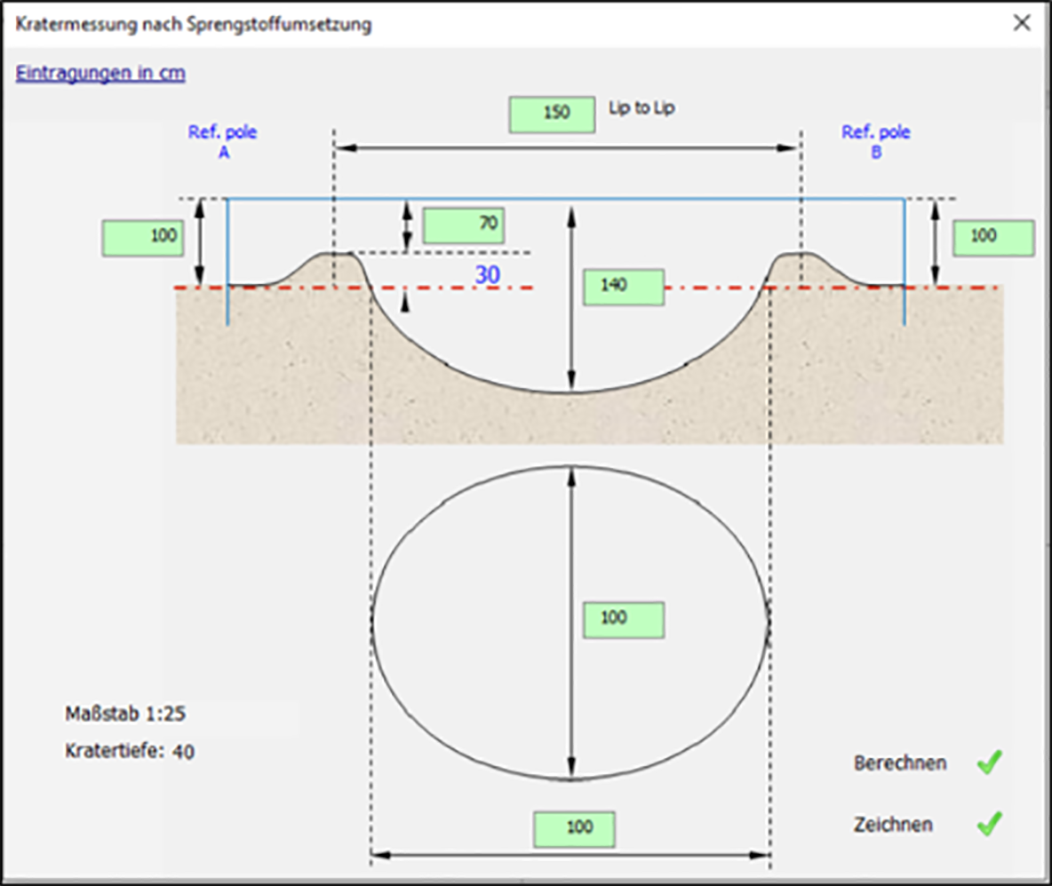 On request, we can create all the symbols you need for your long plan 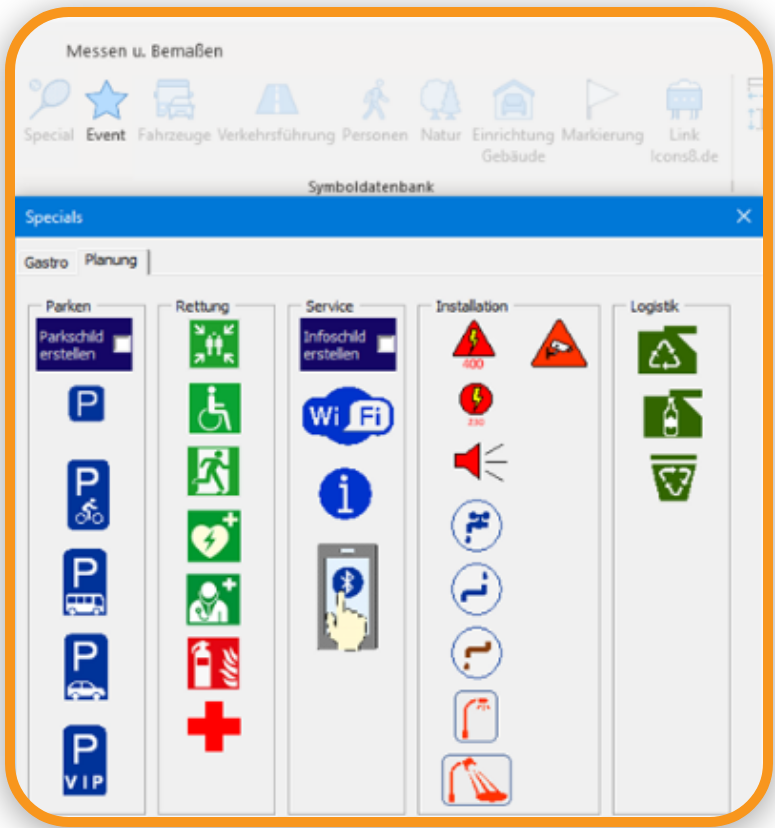 With the help of our “Chris”, you can quickly and easily add victims to your crime scene sketch with proper scaling and placement. With this unique feature, you can not only add a person to your sketch, but also scale the placement of arms and legs to create a meaningful report, for example, to present in court.

GPS measurement method (with the help of GPS coordinates)

Tracing method (with the help of aerial / satellite images)

Using the sketches created with MeasurePoint, automated measurements can be taken within the sketch at any time – a valuable feature especially in the context of evaluation procedures. In addition, the integrated symbol database can be extended individually at any time according to your needs.

Arrange a free and non-binding demo appointment with us now!